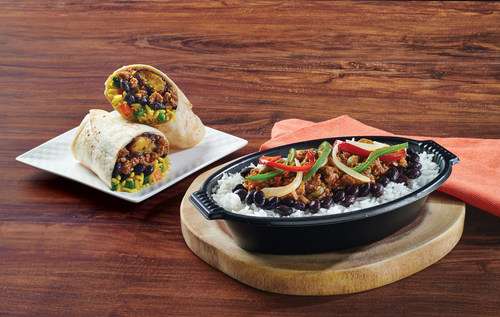 Pollo Tropical, a Florida-based fast-food chain specializing in Caribbean cuisine, has teamed up with Beyond Meat to add two new vegan offerings to the menu.

The new menu items are the Vegan Wrap and the Tropichop bowl with plant-based meat company, Beyond Meat. You also have the option of choosing a regular or large-sized TropiChop bowl.

For about $5, the Pollo Tropical vegan wraps also include beans, plantains, white or brown rice, and the tortilla. This is one of the cheapest fast food vegan meals I’ve seen, at least in South Florida where I live.

The Vegan Tropichop will be your best choice made of

They put TWO plantains in the vegan wrap (see above pics) that kind of puts the flavors on a whole other level.

You can basically expect to have a party in your mouth. It’s so good!

From my experience, the TropiChop bowls are generously packed with the goods you could get away with having a satisfying meal for cheap here, too.

When I saw that Pollo Tropical and Beyond Meat teamed up to put some vegan items on the menu, I nearly lost it.

The first month I realized this was a thing, I ate at Pollo Tropical like six times … at three different locations. True store.

It was so good I had to keep checking to see if it was still as good as I thought it was, ha!