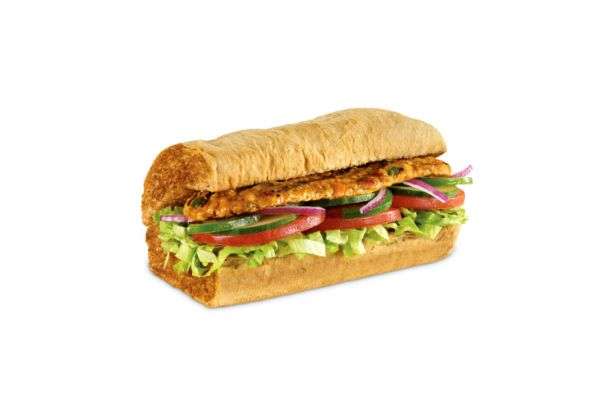 Is The Veggie Patty at Subway Vegan? I get quite enough of this question since subway veggie patty has always had a cult following among fake meat & plant-based meat fans.

A subway veggie patty is a hamburger patty that does not contain meat. It is made with alternatives or substitutes for meat like soybeans, it is a great alternative & replacement for burger meat-based.

Before exploring any details let’s first answer What Is In subway veggie patty? The main component of this substitute is a vegetable patty made from a wonderful formula.

Direct link for downloading the PDF ingredients you can check it by yourself! Here

Is The Veggie Patty at Subway Vegan? Is subway veggie patty Vegan?

Before I did write this article, I was wondering if Is The Veggie Patty at Subway Vegan? I google it and I found many incorrect answers.

The majority justifies that is not vegan by saying that it contains dairy! But the official datasheet of Subway ingredients says the opposite.

The listed ingredients above are the correct ones since there are no traces of dairy.

So, is subway veggie patty Vegan? The answer is 100% YES, Veggie Patty doesn’t contain any derived animal ingredients (Only Plant Based). which means that is suitable for vegans and vegetarians

“You can check Here, there is the officially Allergen information of Subway”

Subway’s Veggie Patty is actually incredibly nutritious and an excellent choice for both vegetarians and meat lovers.

Subway Veggie Patty is a wonderful source of protein and healthy fats since it has 14mg of protein & 11g of total fat, you find its nutrition information in the next subtitle.

As we already explained Veggie Patty is a great option for folks who follow a vegan diet or non-vegan since has a lot of vegetables and other healthy nutrients. The patty’s major ingredients include onions, carrots, whole-grain oats, water chestnuts, mushrooms, and cooked brown rice.

If you are allergic to grains or soy flour you need just pay attention when ordering the Subway Veggie Patty since it contains soy.

According to Subway Allergen information, Veggie Patty is gluten Free. is made without using any kind of gluten. You will find in the section of sources all that you need for checking this answer.

If you have an allergy to soy pay attention when ordering the Subway Veggie Patty since it contains soy.