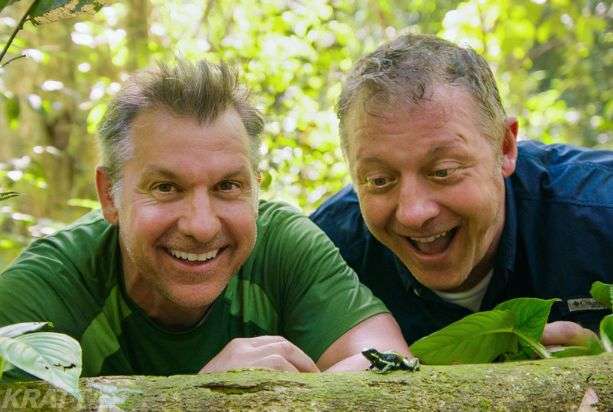 Animal enthusiasts of all ages are now going crazy for the “Wild Alaska Live” show and wondering who these people are. But vegans still wondering if they can follow and watch this series.

As part of the vegan society, I will discuss whether they are vegan or vegetarian in this blog post.

About The Kratt Brothers & Wild Kratt

The Kratt Brothers (Chris Kratt and Martin Kratt) are trained zoologists who have developed a family entertainment business based on their love of animals and their wildly popular status among young people.

They have created, and executive produced more than 200 episodes of the four successful television shows, including “Kratts’ Creatures,” “Zoboomafoo,” “Be the Creature,” and “Wild Kratts.”

Since they established their production firm “Kratt Bros. Co.” in 1993. They play themselves in these shows while also acting as directors, writers, authors, and wildlife cinematographers.

Also, they established their own brand since they sell a wide range of products, from toys to clothes. [2]

Are The Kratt Brothers Vegan?

The answer was challenging for me, but it is clear now! They are not vegans. But “The Kratt Brother’s work” is vegan-friendly.

Would you like to know how or why? First, they take care of animals. This will not make them vegan, but Chris and Martin Kratt are so friendly to vegans because they are making a show that helps all to be educated and shows how we can’t treat animals.

Therefore, it is important to keep in mind the goal of veganism, which is to advocate for the protection and rights of animals.

Here at the SOUNDVEGAN website, we don’t speak in moral absolutes or criticize people for how they live out their vegan convictions. Even a “cheating vegan,” or “chegan,” is helping more animals and the environment than someone who consumes a lot of meat.

Equally, someone just beginning Veganuary may be on the path to becoming a fully-fledged vegan and should therefore be encouraged rather than mocked.

Are The Kratt Brothers Vegetarian?

Fortunately, they’re vegetarian. But do not strictly follow this diet since they don’t consume meat and its derivatives, but they consume fish from time to time.

Are The Wild Kratt Vegan?

The wild Kratt is only educational, and the show is focused on wildlife and nature conservation and educating children about it. It’s not related to veganism.

The Wild Kratt is not vegan, is educational, and is not made based on a lifestyle or specific diet.

DISCLAIMER: SoundVegan, Inc. disclaims all liability and does not advocate the use or abuse of any goods, products, or medications. Although we make every effort to ensure the authenticity of our material, we cannot make any promises. We work hard to give you helpful information so you may choose the best course of action for your lifestyle and health.