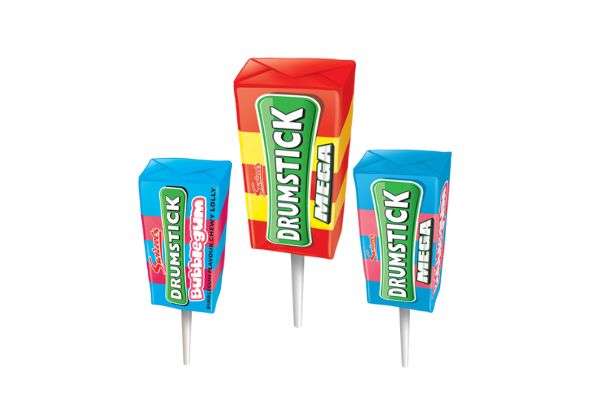 Drumstick Lollies known for their distinct chewy texture and double savors have made those lollies a firm favorite with sweet fans for generations.

This essay demonstrates the truth of Drumstick Lollies whether are vegan or not. Also, I will discuss in detail other related questions in order to check their Gluten-free & Halal status

Before digging into detail let’s first introduce the Drumstick Lollies Flavors, it has three flavors which are:

So, Let’s start first by listing the ingredients of Each flavor of Lollies

After listing the ingredients, the answer will be quite easy in the next section you will find the answer that you need, keep reading

Non-Vegan Flavors of Drumstick Lollies are

Gelatin makes this candy and a lot of candy out of the hand of vegans, this means that Drumstick Lollies are unsuitable for vegans or for a vegan diet. (Gelatin is Red Area)

The answer is YES, According to Swizzels website Drumstick Lollies is certified halal since the derived animal ingredient that Drumstick Lollies consisted it comes from Halal sources instead of Haram sources such as Pigs & Pork.

So, as a Muslim Feel free to have it any time you want, they are the perfect choice for those who are following a Halal diet.

Big YES, Drumstick Lollies are gluten-free and are certified by the company itself. But it is free from any kind of gluten. This means that can serve people allergic to gluten since is gluten-free

Also are not made in facilities that handle gluten. which makes those lollies far to cross-contaminate the gluten. indeed suitable & safe for a gluten-free diet.

Unfortunately, no flavor of Drumstick Lollies is vegetarian since it contains a meat by-product which is Gelatin. As we know any products consisting of gelatin are not allowed on a vegetarian diet.